A small but beautifully executed exhibition “Muse” is on display in the D’Aguilar Art Foundation. I wanted to visit that place for a long time but with it is being opened for public on Tuesdays and Thursdays, I haven’t done it before.

As I stepped in the exhibition hall, the smile settled on my lips because paintings, beautiful paintings were greeting me from the walls. Not installations, not collages, not ready-mades but paintings. And, not politically charged ones at that but the ones that let your soul rest in appreciation of beauty. That was the first pleasant surprise.

The second surprise came with realization of the concept of that exhibition. Several paintings of Brent Malone (1941 -2004), who was often called the father of the Bahamian art for his role in the development of visual art in the Bahamas were selected as points of inspiration and reflections for a quintessentially contemporary and much younger artist Allan Pachino Wallace (1979 – present). Two painters who inhibit  very different worlds: the elder one lived in a much slower world  where primary sources of stimulus came from books, movies, travels, and direct contact with art, and the younger one – whose daily life has been saturated with information and images in much higher density and who has been actively using modern social media to display and popularize his art. Interestingly, both artists traveled to Europe for studies, and there is a high possibility that they did see the same works of art, albeit more then fifty years apart. 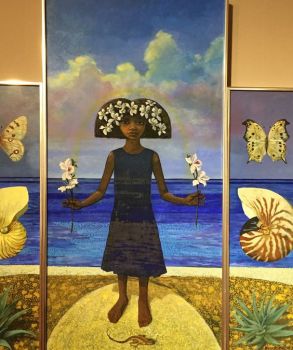 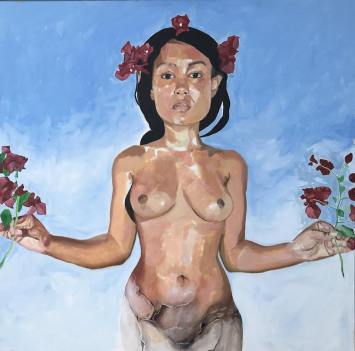 Let’s take a closer look at “Earth Sea Sky” by Brent Malone that was seemingly inspired by traditions of Gothic art.  He creates his painting it the shape of a triptych. Triptychs were usually found in the churches or cathedrals and served devotional purposes. Following the tradition, Malone uses wood not canvass, keeps the central panel larger than the side ones, paints a continuous background of sea and sky through all three panels, and saturate them with objects that carry the symbolic meanings. But every feature carries an individual print of the artist’s psyche. The arms of a  a young woman that is in the heart of the painting are positioned  in a very modern gesture of openness and acceptance. Instead of traditional halo a mane of black hair decorated with beautiful flowers framed her face.  There is a lizard at the feet  which symbolizes a good fortune in many countries and as I was told is a symbol of fertility or riches in the Bahamian one. There are butterflies and conch shells on the side panels. The image of the butterfly that is born a caterpillar, turns into a cocoon, and later morphs into a winged insect was often seen as a reflection of our spiritual transformation or a sign of new beginning. And of course, butterflies are natural fauna here.

If you look at the lower planes of the painting you may notice  aloe plants that can be  often  in people’s yards here. Similar to butterflies the plant often represents resurrection, due to  its ability to heal itself or come back from the dead.

And, one cannot miss the shells. Those  are often connected with Aphrodite/Venus. According to the myth she was born out of sea foam and carried gently on a shell to Cyprus, one of the main sites devoted to her cult.  She was carried not on any shell but on a conch- shell which “can navigate, and by offering their concave part to the wind, sail across the surface of the sea.” Conch are very popular in the Bahamas: their meat is used in various dishes and their shells as decorations.

“Earth, Sea, Sky ” can be easily read as a loving homage to  the artist’s homeland.

Using Malone’s triptych as a point of inspiration and keeping a motive of openness that is so pronounced there, Allan Wallace creates an actual portrait paying homage to natural beauty and femininity.

We are all products of numerous influences and this lovely exhibition offers glimpse of that  complex web.

View all posts by VC